When AGP first decided to pack our bags and head to Las Vegas for the WPPI (Wedding and Portrait Photographers International) Conference and Expo, we couldn’t help but get excited about photographing in the desert! 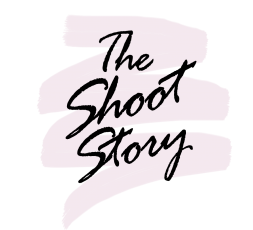 THE SHOOT STORY: Leading up to us flying out of Newfoundland to Las Vegas for WPPI, we contacted and planned on meeting a model for a desert shoot on our last day there, and chatted with her for about a month before making the near 9 hr flight trek to the other side of the continent. Unfortunately the day before our shoot she became unavailable, and while she wasn’t able to help us by being our model this time around, she graciously helped by connecting us with two backup models; Mandy and Sophea. We couldn’t thank her enough as it’s hard to make connections – even with social media – when you live thousands of miles away. Hoping to secure one of them for the following days shoot, we jumped online from our hotel room and reached out to both ladies. With fingers still crossed-just minutes later, they both responded and wanted to be a part of our shoot! Yay! As it turned out, Mandy and Sophea knew each other and had actually worked together before, which later showed in their on camera chemistry! We quickly knew it was meant to be and that our shoot story was only just beginning!

The first day we landed in Vegas, Jim and I had went shopping on the strip and picked out a white lace dress for the shoot. With the happy addition of another model now, we quickly ran back to the shopping district and found the most perfect black lace dress to match our original white lace dress. Correction; Jim found the most perfect black lace dress… 😉 Now, for those of you who’ve never attended WPPI, or a conference week in general, it can be crazy busy! And this week was no different, a month later and we still feel like our heads are spinning from the knowledge gained! So, unfortunately with everything being so hectic and all of the shoots we were planning for, we forgot to line up a floral vendor for our desert shoot. Doh! But, the stars aligned and on the way back to our hotel, with the new dress in tow for our shoot the next day, we saw a woman walking with a beautiful bouquet, perfect for our shoot. I politely asked who made such an awesome arrangement, to which she responded – “Trader Joes… just $3.99!”. So off we went to see Joe about two bouquets, and just $20 later we had gorgeous floral pieces that I later whipped into bouquets – and a bonus chocolate bar!

Mandy and Sophea met us at our hotel and got ready for the shoot in our room. I was shaking I was so excited to photograph in the desert and it was all finally coming together, and even better than we had initially planned! Before we left the room, both Jim and I did gear checks to ensure we had everything we needed, grabbed the bunches of $3.99 floral, and headed to the rental car. The ladies followed behind us in their vehicle and we drove out of the city and away from the building skyline, towards the mountains and dusty desert. We had visited the Valley of Fire State Park earlier the week, which is located just about an hour outside of the city, and knew there were some beautiful locations along that route. Due to permits that we could not attain fast enough, photographing commercially in Valley of Fire was not possible for us this year, but we still had those gorgeous spots to use all along the way and just outside the State Park.

Along the drive while Jim had the wheel and scouted for our first photo stop, I created two bouquets in the passenger seat. Half way through I realized I had no idea how to design a bouquet, but I went for it and was happy with the end result, especially for $20 (and don’t forget that bonus chocolate bar!). After 30 minutes of driving, 2 bouquet creations and about 10 Instagram story posts, we finally reached our first location. The spot we selected was a open area on the side of a long stretch of road, where we could easily see traffic coming for days. Oddly enough, on the opposite side of the road there were hundreds of firework shells. Apparently it’s a common practice (and totally legal) to fire them off nightly just feet away from where we photographed. While we weren’t too interested in the firework skeletons, I did enjoy these adorable little bushes you see in the first images. I like to know what we photograph, so afterwards we did some research by asking the locals. The bushes are known as a Creosote bush or ‘greasewood’. We also found out these were once used as a medicinal herb by some groups, and in Mexico the plant means “governess”, due to its ability to suck up more ground water than others therefore inhibiting the growth of nearby plants.

After a few quick photos and a live Facebook video with everyone back home from this location, we moved the models out to the road. We safely watched each others backs while Jim and I shared the shoot. I couldn’t help but photograph with my trusty 35mm and 135mm but Jim switched it up a little by tossing on a wide angle (17-40mm) for a few dynamic shots during the shoot. The ladies rocked the road and we quickly finished up at this second spot at the first location and headed onto the second location. During the drive, Sophea got a call that she may have to work and it was a great gig, so we knew we couldn’t make her late! 20 minutes later we arrived at our next and likely last location, and the closest we could get to The Valley of Fire without permits. This location was my favourite. It seemed like the red and brown mountains went on forever, and the sky was the most beautiful shade of blue. We found a perfect peak to place the models and started shooting again right away, as we knew Sophea had to get back to the city sooner than later. We shot as fast as we could and still enjoyed every second of it. 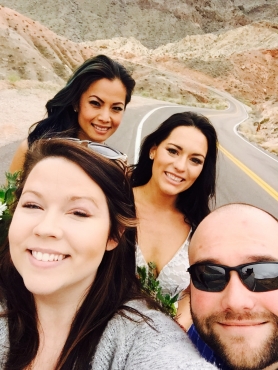 We photographed at this location for about 20 minutes which wrapped our desert shoot for the day. Mandy and Sophea headed back to the city, while Jim and I decided to spend the last few hours we had in Vegas, driving through the orange and red rocks of The Valley of Fire. Knowing we couldn’t bring models in there, but also feeling how close we were with them was a major tease. So much so, that we decided to grab a few shots of my own rings in the orange sand of the state park to tie in with this shoots images. We also grabbed a few photos while driving through the park; when not fully captivated by it’s awesomeness. Having professional models definitely helps, but the location pulls everything together. This backdrop was unreal to work with, and even more unreal to witness. If you ever have the opportunity to travel to Vegas and drive outside the city, do it! While the strip and it’s lights and sounds are the main attraction, what you’ll find minutes outside city limits is just as surreal!

Thank you for reading this Shoot Story and our Las Vegas Desert Shoot Blog, we hope you enjoyed it, we can’t wait to share the next! <3 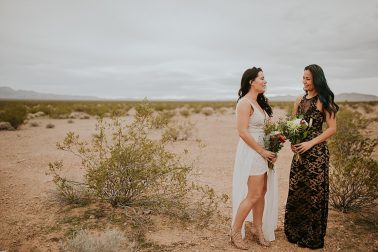 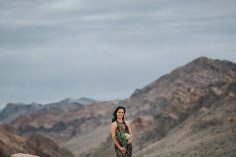